I've noticed that as of the past couple of days my WU server process regularly (every 5-10 minutes) seems to be stuck in a blocking loop lasting about 30-60 seconds. During this period the game is largely unresponsive to players. (Menus not usable, can't move properly, etc.) Usually at the end of it if you've moved your game client isn't in sync with your position on the server.

This definitely looks to be CPU related, not memory or disk I/O: 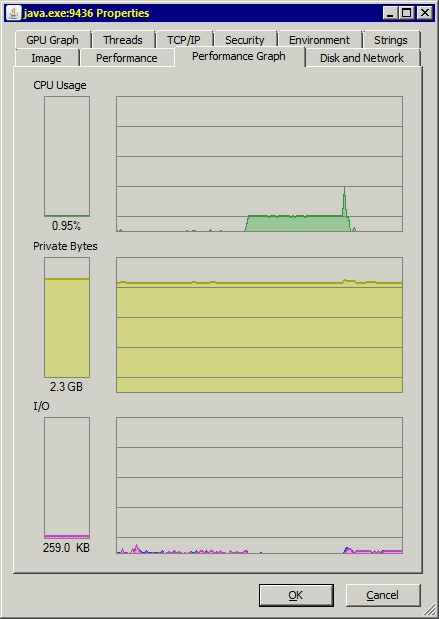 The only change I had made was increasing the tree spread odds variable from 500 to 1000. I thought perhaps there was some limit or bug causing a loop every time tree spreading was being "gambled", though since putting that back to 500 the problem still persists.
Top

What does the log say? Usually, when there's lag log messages will be printed. Increasing RAM could solve the issue.
Top
Post Reply
2 posts • Page 1 of 1

Disclaimer: Wurm Unlimited is a game produced by Code Club AB. Wurm Online and Code Club AB do not endorse and are not responsible or liable for any content, products, services or information available on wurm-unlimited.net, and this site is not connected to Wurm Online nor is it the official website. Please visit the Wurm Online Official Site.